Eric Koenig is Board Certified in Business Litigation through The Florida Bar, a designation earned by fewer than 250 out of over 65,000 attorneys (less than .3%) statewide. He is a Co-Leader of the Litigtion and Dispute Resolution Group, and also works with the firm’s Construction and Professional Liability practices.

Eric serves as a counselor and advisor to business owners and executives, helping them navigate and resolve complex legal matters and disputes. He specializes in complex commercial litigation, estate litigation, construction litigation, landlord/tenant litigation, and employment litigation in state and federal courts throughout the entire state of Florida. Eric represents commercial property owners in connection with a variety of litigation matters, including disputes concerning Title III of the Americans with Disabilities Act and compliance with federal, state, and local regulations. He also represents residential and commercial property owners involved in disputes with adjacent property owners involving easement rights, boundary lines, adverse possession, construction liens, and rainwater runoff/drainage. In employment matters, Eric represents both employers and employees in disputes related to back pay, benefits, and covenants not to compete, including litigation of same to obtain or resist temporary and permanent injunctions.

Eric previously served in the United States Marine Corps and is a former police officer. In his free time, Eric competes in professional barbeque competitions under the name Habeas Porkus, and has won the Hillsborough County Bar Association’s Annual Judicial Pig Roast/Food Festival seven times, most recently in 2018. Eric has taken the top award – Grand Champion – for the Tampa Pig-Jig three out of the last four years.

Eric is also an accomplished beer brew-master, with over 25 styles in his unique set of homebrews and having won over 300 brewing medals in the past 20 years. 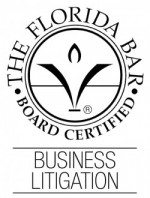